Deals worth millions of dollars sealed at Gulf Print & Pack 2019 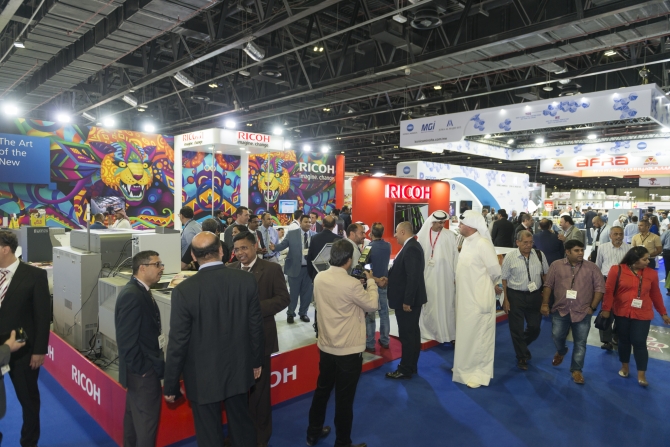 Gulf Print & Pack 2019 – the MENA region’s leading trade show for the commercial and package printing sector – ended on a high note as business deals worth millions of dollars were sealed during the bi-annual event.

The show, which was hosted at World Trade Centre in Dubai, took place from 15-18 April, and attracted 8,737 visitors from 90 countries. Afra International, Canon, HP, Konica Minolta, Phoenix Technologies, Prestige Graphics, Ricoh and Xerox were among the many leading manufacturers taking part in the exhibition, which generated a significant number of leads.

Canon, which sold more than 30 machines, anticipates that sales will reach $1.5 million. Xerox, meanwhile, sold more than 6 Xerox Iridesse and 22 Versant 180 Press machines at the show. Among others were Afra International, who sold its lamination and packaging machines.

Amit Radia, chief executive officer of Atlas Group, said: “This year, Gulf Print & Pack was very focused, and with a wide variety of equipment on show. Considering the market environment, it was great to see such a positive response from the attendees. I believe we are seeing light at the end of the tunnel for the print industry in the region and those who have reinvented themselves will see positive growth after the last few challenging years.”

She continued: “The introduction of the Innovation Trail, with live machinery and technology demonstrations at this year’s show, was aimed at making Gulf Print & Pack 2019 visitors see just what’s possible and experience the latest technologies and trends in the market live in action. This really paid off, as we received positive feedback from visitors about the demonstrations throughout the entire four days of the show, which is fantastic.”

Echoing this enthusiasm, Chris Lynch, head of Production Technology and Graphic Communications Services, Xerox Middle East & Africa, said: “We were delighted with the level of interest in the Xerox stand and record sales of our Iridesse and Versant machines. This was helped hugely by being part of the Innovation Trail, which really created momentum in the run up to and during this year’s show, and all our live demonstrations had a fantastic turn out. The seminars we hosted in the dedicated presentation area on our stand were likewise well attended.”

This was also reflected in visitor feedback. Kimi Yang, business development director, Chen Lui Printing Press, China, said: “We are delighted with the caliber of the business people who we’ve met at this event. This exhibition has provided quality leads. We had some very interesting discussions immediately after our visit to certain stands. This is our first time and the exhibition provided us with ideal solutions for our business. We will definitely share this with other businesses in China. We are definitely looking forward to visit again”.

Milburn added: “We are pleased with such positive feedback from both exhibitors and visitors who came to this year’s show. It shows that despite a challenging period, the growth prospects of the commercial and package printing sector in this part of the world are improving, and maintains the UAE’s position as a vital commercial and package printing hub in the MENA region and beyond.”

Lynch summed it up by saying: “‘The show was certainly more international than ever before – we saw a greater number of visitors from around the world than in previous editions, and our international presenters were extremely well received. Visitors valued being able to listen to presenters sharing views and trends from the broader global print market beyond the MENA region. All in all, a tremendous show.”

For images from this year’s show, visit the photo gallery here.
Displaying the newest in multi-substrate presses, wide and narrow format digital presses, laser die-cutting, smart labels/packaging, and software, Gulf Print & Pack is aimed primarily at printers, service providers, brand owners and designers. Gulf Print & Pack 2019 attracted a total of 8,737 visitors from 90 countries – 63% of which came from the UAE. Over 250 exhibitors took part.