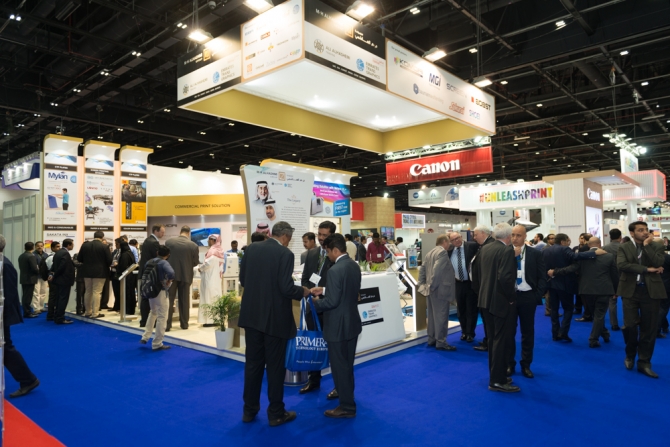 Preparations are ramping up for this year’s Gulf Print & Pack 2019 – the Middle East’s leading trade show for the commercial and package printing sector – with almost half of exhibitors taking part hailing from outside the Middle East and North Africa (MENA) region.

Gulf Print & Pack 2019 returns to World Trade Centre in Dubai from 15-18 April. Overseas exhibitors confirmed as taking part include: ATECE Group (the Netherlands), Berhalter (Switzerland), Holweg (France), Novurania (Italy), OMM Graphic (Malaysia), RotoMetrics (US), Tong Shin Pack Co Ltd (Korea), UPM Raflatac (Finland), and Winpack Machinery (Taiwan).
The show boasts a growing number of first-time exhibitors, including Lemorau (Portugal), Frimpeks (Turkey) and Pulse Printing Products (UK), alongside a growing number of companies from the Indian sub-continent making their show debut. They include: Apex Industries, Technova Imaging Systems (both from India), and Roshan Packages (Pakistan).
Returning exhibitors include internationally recognized brands Bobst, Canon, HP, Konica Minolta and Xerox. Most of these will be showcasing their machinery to potential buyers at a series of live demonstrations taking place throughout the four days of the show as part of a newly introduced “Innovation Trail” feature. Gulf Print & Pack 2019 is the only platform that brings all these manufacturers together under the one roof in the region.
Lisa Milburn, managing director, Gulf Print & Pack, commented: “We are delighted with the international response from overseas exhibitors at this year’s event. At its core, it has  typically been Middle Eastern and African, but already we are looking forward to the most far-reaching edition of the show yet, with a particularly strong representation from Europe and Southeast Asia. It is proof that overseas companies are eager to take advantage of the opportunities presented in the region. It truly is a global show.”
The number of pre-show registrations from outside the MENA region are already way ahead of 2017 and come from countries as diverse as Bahrain, China, Egypt, Germany, India, Kuwait, Nigeria, Oman, Pakistan, Saudi Arabia and Turkey. With the show displaying the newest in multi-substrate presses, wide and narrow format digital presses, laser die-cutting, smart labels/packaging, and software, it is aimed primarily at printers, service providers, brand owners and designers.
Explaining why the show plays such a key role in connecting all these industry stakeholders, Chris Lynch, head of production technology, Xerox Middle East & Africa, said: “Gulf Print & Pack 2019 promises to be another ‘must see’ event for those in the business of printing and packaging across the Middle East, Africa and Asia. By connecting industry leaders, suppliers, market-creators and print service providers together with consumers of print and packaging, this event has rightfully earned a reputation for helping grow the market in new and exciting ways.”
Echoing this momentum, as a first-time exhibitor, Susana Teixeira, CFO & Sales, Lemorau, said: “Lemorau decided to attend Gulf Print & Pack 2019 in order to achieve more visibility in the Middle Eastern market. Lemorau already has some customers in Dubai and looks forward to expanding in this market by exhibiting at the show.”
Entry to the exhibition is free, but visitors should pre-register at www.gulfprintpack.com
Gulf Print & Pack 2017 attracted a total of 9,237 visitors from 98 countries – 60% of which came from the UAE. A total of 252 exhibitors took part. Close to AED30 million worth of machines were sold during the event.
Gulf Print & Pack is organized by F&E, one of the most influential and long-standing names in the Middle East's events sector. More information: www.fegroup.ae.
F&E is part of Tarsus Group, the international business-to-business media group  which also organize the Labelexpo Global Series of major labels and package printing trade shows. More information: www.labelexpo.com.